With the purchase of the surrounding property, the tool manufacturer BASS from Niederstetten has secured the possibility to expand its company headquarters in the "Hohe Buche" industrial area.

"Since the construction of our new factory in 2004, we have grown steadily. The past few months have been the strongest in the company's almost 75-year-long history," says Martin Zeller, Managing Director of BASS. In the meantime, vacant space is in short supply. Not only the machinery, but also the number of office workplaces have increased in recent years. To ensure that the company can continue to grow, the bordering parcels of land have now been purchased for the construction of another production hall, which will take place before the end of the decade.

Following the notary appointment, representatives of the town of Niederstetten welcomed the management of OSG and BASS to the local Albert-Sammt-Museum. This served as a setting for the historical connection between Niederstetten and Japan, as the town's honorary citizen and airship captain Albert Sammt was a guest in Japan during the 1929 around-the-world flight.

To thank him for his commitment to the location Niederstetten, Deputy Mayor Harald Dietz handed over a copy of Albert Sammt's biography and a high-quality photograph to Hideaki Osawa, showing the Zeppelin crew's gift to the Japanese Emperor. Klaus Brodbeck, interim head of administration for the town, also welcomed the managers and emphasized BASS's commitment both to its workforce and to the social life of Niederstetten.

The representatives of the town of Niederstetten, OSG and BASS are looking forward to further cooperation in partnership. 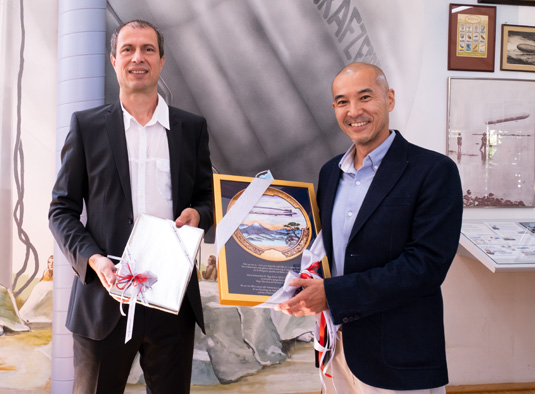 Bobby Osawa together with the deputy mayor Harald Dietz

This website uses cookies. Those have two functions: On the one hand they are providing basic functionality for this website. On the other hand they allow us to improve our content for you by saving and analyzing anonymized user data. You can redraw your consent to using these cookies at any time. Find more information regarding cookies on our Data Protection Declaration and regarding us on the Imprint.